This is a revelation for Tutubi who was informed of this virtually unknown destination by his friened from France who came here on his invitation, and got wind of this place from Lonely Planet Philippines (which makes the overrated travel guide book quite useful in this case): The Mystical Island of Lamanoc, Anda, Bohol

Why is it mystical? Well, this place is a small island off the coast of Anda with ancient rock art in the form of red hematite paintings (the Angono Petroglyphs in Binangonan, Rizal is another ancient cave art), ancient cave dwellings, tombs and burial grounds, prehistoric human settlement (prehistoric, in Philippine historical context does not mean dinosaurs) and mystic practices mostly involving chicken in the rituals (called manok or manok, thus the name) 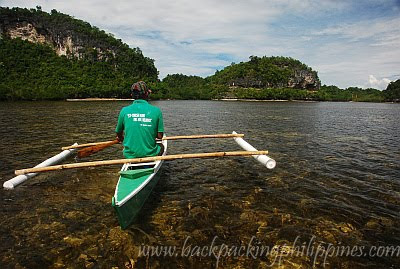 Lamanoc Island (or Lamanok Island in some travel journals) has the Bakhawan Mangrove Forest of Anda as gateway where you board a very small outrigger boats (banca) for for only three persons from Lamanoc Point to the "enchanted island" about a kilometer away. 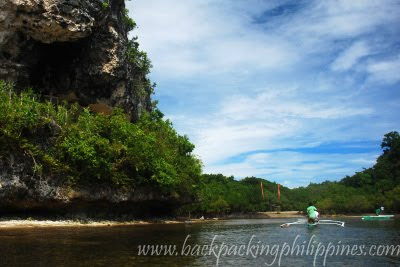 The first stop of the eco-tourism and historical tour is the ancient rock art in the form of red hematite paintings meaning ancient cave dwellers used tools made of rock and blood of animals on cave walls. 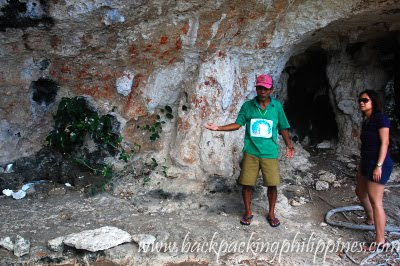 the most sought after tour guide on the island (meaning: only one) explaining how the place was discovered and the history of the place. Tutubi doubts though some historical claims as they don't really add up. Perhaps a more authoritative source like the National Museum can put everything in black and white as this tour guide inserts too much folk lore, superstitions and his own comments on the place. 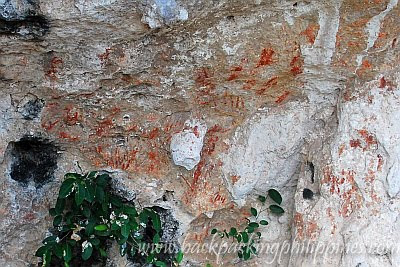 Close up view of rock art which is very different from the famous cave art of Lascaux, France. No images of bison, horses and cattle, only abstract hand paints. Evidence of vandalism, looting (grave robbers), as always, are present

This prehistoric rock art is said to be evidence of Paleolitic era (Stone Age) civilization which can be found in this southern town of Bohol Island.

Coming up: Burial grounds and caves of Lamanoc Island

How to get to Anda, Bohol:

from Tagbilaran Airport, you can already rent a van/car rental to take you there or ride a tricycle to the bus station to Anda. In Anda you need another tricycle to take you to Barangay Badiang. The easiest and leisurely way is to rent a motorbike/motorcycle in Tagbilaran to explore the island at your own pace.

wow, who would have thought? how did lonely planet know about this?

photo cache, it's realy relatively unknown for bohol, recently developed. probably seen the press release but Lonely Planet does not have pictures, just brief description so probably they have yet to actually visit the place

Had a tour in Bohol and one tour guide warned us not to take pictures inside the cave.

Lamanoc island is regarded to be the sacred places of shamans in the Philippines. It is an island, based on accounts, where the shamans can obtain or relinquish their mystic powers.