For years we've been hearing about planned construction of roads and rail lines and other means to effect faster travel in the Philippines but turned out to be mere "drawings" like for example that uber-expensive and corruption-ridden NorthRail (another "legacy" of the "great" Gloria Macapagal-Arroyo) and super-delayed SLEx-NLEx road connectors (SMC-led Skyway and MVP-led PNR tracks) and the that was recently approved but will have to wait for 2016 the soonest.

The Subic Clark Tarlac Expressway undoubtedly improved travel time up north to Baguio and Subic but the TPLEx will further reduce the travel time forward from Tarlac as it connects to SCTEx to Pangasinan and Rosario, La Union, just before you either choose Kennon Road or Marcos Highway going up Baguio City

As of the moment we still can't find the definitive TPLEx map but thrice Tutubi found road construction near the end of SCTEx and a flyover near the Tarlac -Cabanatuan Road (an detour Tutubi loves to take just to avoid traffic of Tarlac and pass by Victoria, Paniqui and Pura towns). 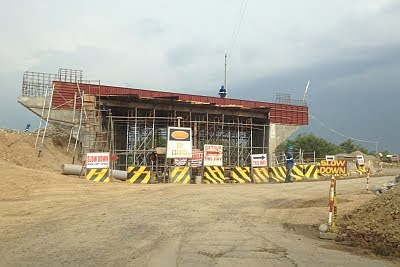 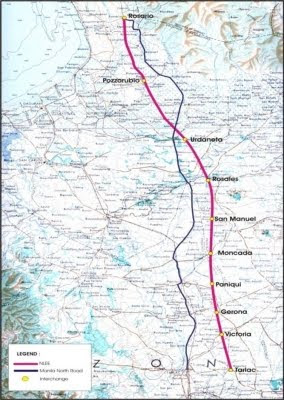 Imagine the reduction of travel time from Manila to Baguio from 6 hours to about 3.5 hours as you don't have to pass by the traffic-prone and tricycle-laden MacArthur Highway. Ilocos Region is also possible to be driven by Tutubi when this opens to the public.

Will update this post then Tutubi gets hold of a TPLEx map and probably TPLEx toll fees and rates, toll gates and exits once finished.

TARGET COMPLETION of TPLEx Phase 1 in in May 2013.