Just to give in to a request by an online friend on why Tutubi commented that Facebook is more of a marketing tool for blogs but it's not really effective in giving you the more important thing needed by a blog: traffic!

This blog does not have the numbers when it comes to Facebook page followers nor Twitter nor RSS feed subscribers but there's one thing here that advertisers and affiliates see under the hood, something readers don't see unless you monitor the blog's statcounter numbers daily:

herewith are the web analytics from January 1 to December 31, 2012 from Google Analytics: 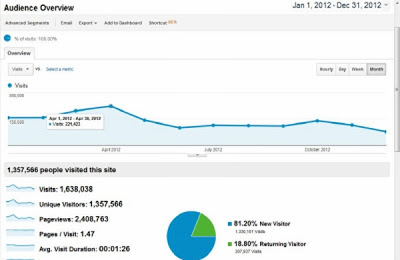 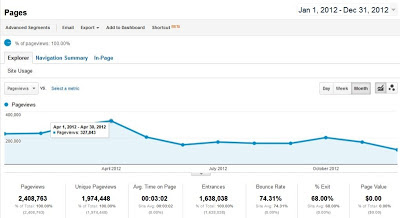 Adsense revenue: of course this is confidential, please note that it's only around august/september when the site was fully optimized for adsense that resulted to 30% more revenues without increase in traffic (thanks mucho Google). This is the reason why there has been no major template re-design here (besides Tutubi's dysfunctional motor system syndrome)

Now to support the claim that Facebook is next to useless (for now) here are the numbers:

In numbers, Facebook referrals out of 2.4M visits for 2012 is only around 11,000. Google is still is this blog's best friend followed by Yahoo! Top blog referrals came from Flipnomad and Chyng Reyes (thanks).

Something more must be done to improve the likes and traffic from FB, but looking at other bloggers with more than 10k or even 20k followers on FB but traffic, gauged from Pinoy Top Blogs, is still too low, is discouraging. (By the way, do you have an idea why Tutubi opted out of Pinoy Top Blogs? :)

Anyway, blogging is just a distraction for Tutubi, something he does in his (very limited) free time...and he doesn't like to be called names nor wants to be famous thus his still being a private but not anonymous blogger.

Looking forward for more explorations (and less post backlogs) in 2013!

You must have made an extra effort to get this information. Thank you for this.