Tutubi has always been a football fan from way, way back when the Azkals were losing, when nobody cares about them, when no women scream at their sight and when no people will recognize them until the momentous AFC Suzuki Cup 2010 when they upset powerhouse Vietnam and proceeded to the semifinals for the first time in history.

Tutubi flew on the first flight to Singapore of Philippine Airlines. On this fateful morning, he experienced rude treatment by the Immigration Officer who wrongly thought he's an OFW looking to avoid the OFW exit clearance.

It was before embarcation in Singapore Changi Airport when he noticed a commotion of passengers a few rows before him and noticed Azkals star striker Phil Younghusband posing for fans pictures. 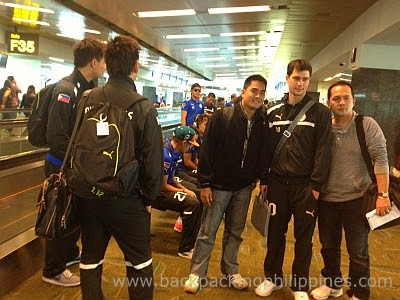 fans posing with Phil Younghusband but completely ignored the others, what a shame

Tutubi caught up with the Azkals on the walkalators, at the immigration counters and carousel of Changi Airport and was able to take pictures. He noticed though that due to the showbiz insanity of Pinoys, they can only recognize brothers Phil and James Younghusband and completely ignored the others. 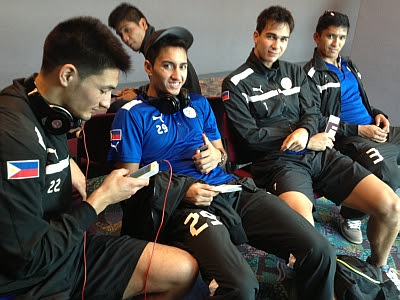 the dejected Azkals with only Patrick Reichelt (#29) smiling at the camera. Paul Mulders (#22), James Youghusband (midfielder #7 and chris greatwich #3)

Tutubi wanted to buy tickets by heading straight to Jalan Besar Stadium but it was raining so he waited for about an hour at the hotel. It's good that news got on facebook that the very limited tickets allocated to Filipinos were sold out after fifteen minutes. So much for Tutubi hoping to watch the football game live in Singapore (and he can't find any good Azkals live streaming)

Eventually, the Azkals lost the match to Singapore in a heartbreaking 0-1 scoreline. (Singpore ended up as champion later by beating Malaysia in the finals)

On Tutubi's return trip back to Manila, Tutubi again saw the Philippine Azkals, all in somber mood due to the loss the night before...

coming up next, encounters with Phil Younghusband and Chieffy Caligdong :P

Well that is what happens when the big giants clash with a local team, there is no challenge what so ever. The big giants are for sure going to win and decide the outcome....