Rush airport transfers in Manila's Ninoy Aquino International Airport used to be a pain in the ...

Getting from one NAIA terminal 1 to Terminal 3 averages 25 minutes by taxi (if you can get a taxi right away.) This is expected to be shortened to 8 minutes once under-construction NAIA Expressway project is completed to link Sales Interchange (SLEx) to Coastal Road and the PAGCOR Entertainment City complex and even Skyway to Makati and eventually to NLEx Balintawak if Skyway Stage 3 is completed next year. 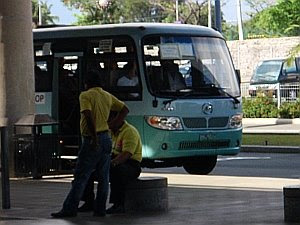 Note: The NAIA Terminal 3 shuttle bus to Baclaran, MRT and LRT has been resumed recently, shuttle fare is still PhP20.00/passenger :(


these shuttle buses, if you want Manila Airport transfers between terminals, have plain white color with no markings

requires waiting time for the shuttle buses to arrive and have passengers. well, recommend you take the taxi if you have lots of luggage

The NAIA Airport shuttle bus has plain white color without markings.
How do we know that it is the Airport Shuttle bus or it is the Criminals bus? The problem of Filipino Airport planners are not customer oriented.

There must be an identification in the bus written NAIA Airport Shuttle bus and the direction to Terminal 2 or 3 etc. This is still the old ways 20years ago, that our Airport is the most dangeraous airport in the world.