Getting lost really has its rewards wherein you purposely get out of the usual tour itineraries and routes but wander aimlessly looking for something new.

This trip to an old Spanish lighthouse was made possible when Tutubi got "lost on purpose" in Batangas City, looked for a place to eat that's new to him but in the process found himself adrift on the zigzag road to Lobo, Batangas.

When he got to Lobo, he can't find any restaurant, just small town eateries serving usual stuff, he thought of going straight to the old Spanish lighthouse on Punta Malabrigo: the Faro de Punta Malabrigo

From the town proper of Lobo, he asked around for directions and made to turned left near the town plaza then left again to the road going to Laiya, San Juan, Batangas.

It was a route with a view of Cape Verde Passage, gray sand beaches (if not pebbles) and hilly terrain. It was on this lonely road's high portion when the sight of the heritage lighthouse, often portrayed as romatic sentinels of the sea appeared to him.

This is the fifth of the twenty-four lighthouses built by the Spaniards, all of which he intends to visit in his lifetime. Will he be able to visit all? Just keep your fingers crossed! :P 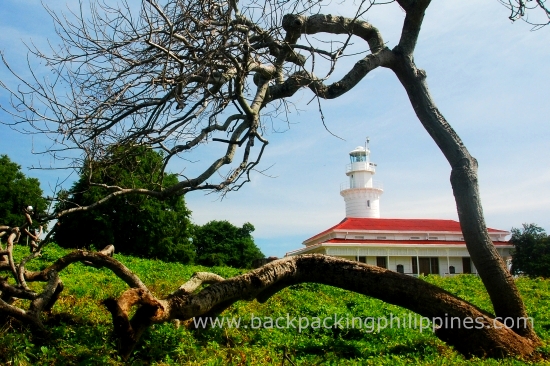 This old lighthouse seems to be well-maintained, unlike the other lighthouses earlier seen by Tutubi. It was newly-painted as if it's still wet.

Tutubi wasn't able to get inside to shoot interiors including the spiral staircase of the tower. It was closed, nobody seems to be around. There's a sign that says no picture taking/video without permit from the Philippine Coastguard, the government agency assigned to maintain the heritage structure and navigational aid in this time of the global positioning system (GPS) ubiquity.

There's also a battery of solar cells enclosed in a cage charging the batteries powering the beacon lights at night.

Lighthouses though are popular shoot locations of movies and teleseryes, can you recall which of them were shot here?

Designed by Guillermo Brockman as a cylindrical brick tower with metal staircase, adjacent pavilion and machine room in 1891

Built by the Chinese contractor Jose Garcia in 1896

How to get to Lobo, Batangas:

if you have a GPS or a GPS app in your iOS/Android devices, set it to these coordinates 13° 35.922N 121° 15.604E and you will it on the hilly portion of Malabrigo road connecting Lobo town to Laiya, San Juan Batangas. A map of Lobo is available here

best to have a car to get there, it's just SLEx, Startoll then left at the end of Startoll, follow the zigzag road going to Lobo.

In Lobo town, turn left then left again on the road going to Malabrigo

tin-tin, yes. i don't use GPS to find my way, i use it to map places I visit so that others won't be lost :P