The annual festival of Paete, Laguna showcasing its traditional arts of ukit (carving) and taka (papier mache) that is scheduled near the birthday of Mariano Madrinan who was awarded a gold medal by the Spanish king for his Mater Dolorosa wood carving masterpiece displayed at the International Colonial and Export Exhibition in Amsterdam in 1883. 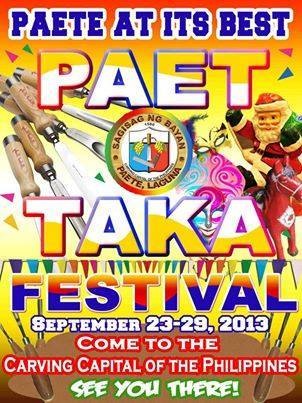 Venue will most probably be at the Paete Town Plaza, though not explicitly indicated.

Have to warn you on this, per experience and observation, the events there don't start on time, one or two hours late.
This bad habit should be changed by Paetenians if they really want to make the event famous.

The activities are typical of what you see in other festivals like the beauty contests, dance contests and street dancing (a good photo opportunity) though the demostration of ice carving, wood carving and garnishing are unique to Paete so far

In order for this festival to be famous, marketing should be improved by word of mouth, social media to make up for the perennial lack of funds.

The International Colonial and Export Exhibition in Amsterdam 1883 was a display of colonialism of imperial Europe where even locals of Java were on display in a human zoo.