Solutions to Traffic Problem on EDSA, Manila and the Whole Country

Seriously, if Tutubi were the president, he can improve the traffic problem not just on EDSA and Metro Manila but the whole country.

1. No political will on leaders to impose traffic rules and change the status quo
2. Lack of discipline for drivers, commuters and pedestrians
3. The boundary system for jeepneys and commission system for bus drivers are EVIL!
4. Inept, if not corrupt, government heads and workers

Just to contribute positively, and not to add to his usual rant, here are his recommendations and solutions to the traffic problem with to-do list for the President, MMDA, DPWH, DOTC/LTO/LTFRB, BOC, BIR, LGUS, drivers, commuters and pedestrians


President of the Republic of the Philippines

1. Show everyone who's boss when it comes to traffic. Political will is the key if it's good for the majority
2. Appoint technocrats very capable in solving problems, rather than politicians, and with political will to get the job done.
3. Replace inefficient department/agency heads
4. Decentralize, develop other areas so that people will not go to Metro Manila to work, study and add to overcrowding.
5. Provide plan to phase out old jeepneys and the boundary system 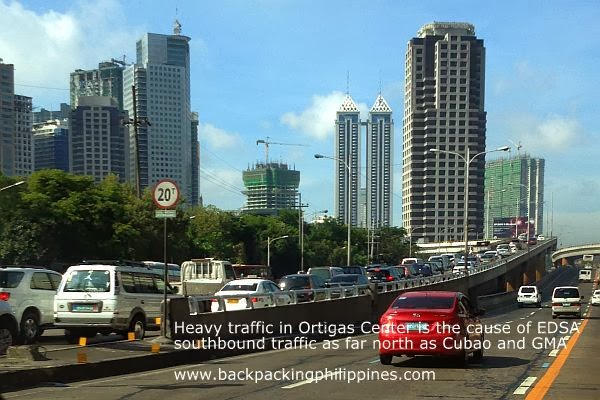 This can be enforced by outsourcing the towing to other companies with tow trucks equipped with CCTV to document apprehensions and towing, proper ticketing and auditing.

3. Use contactless traffic violation receipt issuance using CCTVs at major roads and intersections. This is more of deterrent. If drivers know they can't get away with it, they'll behave. You will also reduce interaction with "kotong COPS"

4. Construct better waiting sheds against sun and rain. Did you notice heavy traffic on EDSA when it's raining? One cause of this are buses hogging one, two or even three lanes under the MRT station as most passengers are there when it's raining.

5. Use plate number recognition capabilities to CCTV to randomly check
vehicles on EDSA and tollways out of Metro Manila. You can apprehend fake plate numbers, unregistered cars, even carnapped cars using this method. This technology is not new, the software can even be developed by college students if they only thought of this

6. Decongest EDSA Ortigas
by using bollards/fence to block vehicles from Rochester to use flyover to Ortigas Center
Strictly no parking on Ortigas Avenue in front of DLSU and POEA area
Do not allow jeepneys and buses waiting too long in front of Robinsons Galleria and Eton Cyberpod Corinthian

7. Decongest EDSA Shaw Crossing
Do not allow buses waiting too long in front of Starmall, Teleperformance and Pavilion. Some bus drivers take "yosi breaks" in front of the power substation and Lux Center.
Enforce nose in/nose out policy for vehicles of SMITs building who also waits in front of the building 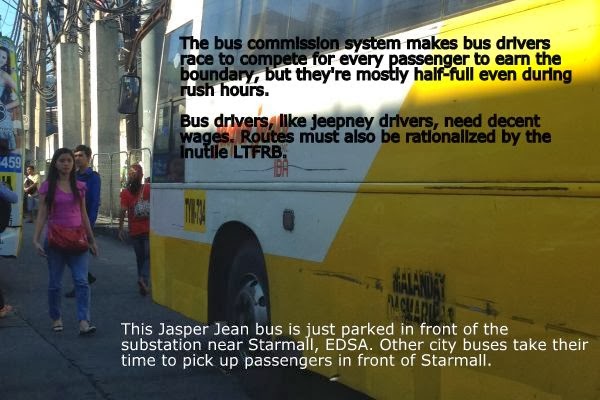 8. Decongest EDSA Balintawak: Do not allow parking on EDSA, no vendors on selling their wares on EDSA, no jaywalkers

9. Decongest EDSA Taft Rotonda: again, no waiting of jeepneys and buses at the corners, forbid tricycles and pedicabs. You don't need a flyover to easily ease traffic here. This intersection is the cause of traffic as far north as EDSA Crossing.

10. Decongest C5-Libis-Eastwood: do not allow the Rosario - Cubao jeepneys to park and wait on C5, again, the cause of heavy traffic in Libis - EDSA traffic area

11. Remove illegal street vendors occupying streets and sidewalks. You can see them creating traffic (I miss BF for this, someone who has political will) in Balintawak (QC), Munoz (QC), Baclaran, Divisoria, Kalayaan (Makati) and other public markets

12. Fast track the completion of integrated bus terminals, one for North-bound buses near EDSA Balintawak and another for south-bound buses near SLEX Magallanes, Makati or even Alabang, Muntinlupa. Just ensure there's the connectivity to rail, buses and jeepneys for commuter safety and convenience.

13. Optimize/Fix the traffic signal settings. Some have too short Green Light (West Avenue turning left to Baler in QC) or those traffic signals within Bonifacio Global City (BGC) that are too short to cross the street for pedestrians

14. Go after vehicles with defective headlights, brake lights, and turn signals, causing accidents and thus traffic jams. Most tricycles and jeepneys don't use headlights at night

16. Prohibit the use of very bright headlights (High Intensity Discharge (HID) lamps) that cause temporary blindness of drivers that leads to accidents 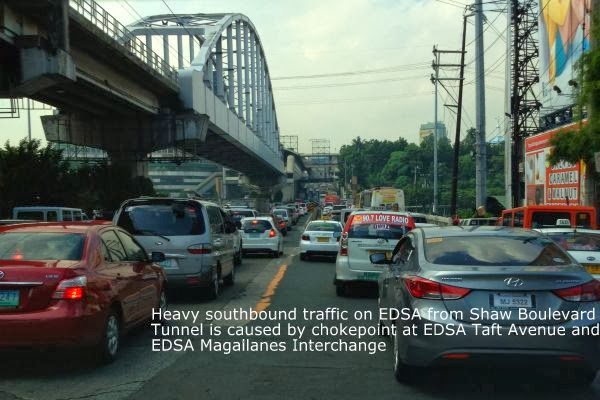 3. Fast track the implementation of NAIA Expressway, Skyway and the SLEX-NLEX link road

5. Widen roads: C5 Bagong Ilog as bottleneck of C5 northbound all the way to BGC

6. Build viaducts/elevated roads: Kalayaan Avenue to connect EDSA to C5 bypassing the market and Lawton Avenue intersection, and with entrance from EDSA. This will decongest EDSA Buendia up to Magallanes

1. Build mass transport rail or BRT on Ortigas Avenue going to Rizal towns then reduce/phase out jeepneys. This will de-congest Ortigas Avenue

2. Modernize the PNR, expand capacity of MRT, LRT and LRT 2. Extend the LRT up to Tagaytay to improve tourism, extend LRT 2 up to North Harbor, again for tourism and development of Tondo. Connect LRT to MRT and add another line to Espana, Quiapo

3. Build subways, they need not travel in straight lines as in like the MRT and LRT. You can have them in a circle like say from NAIA, to BGC, Ortigas Center, Cubao, Libis, UP, Balintawak (near the proposed North Bus terminal), Manila, Quiapo, Pasay, Paranaque (back in NAIA).

4. Build monorails to connect all terminals of NAIA, from NAIA to BGC, from MRT Ayala Avenue to LRT Buendia (even up to SM Mall of Asia) cutting through Makati CBD, From Cainta, Pasig to MRT Ortigas/Shaw through Ortigas Center even up to LRT 2 V Mapa, from San Juan to MRT Ortigas or Shaw, Las Pinas to the proposed LRT terminal, from Sucat to the proposed LRT terminal

5. Study better models of river ferries and even water taxis.

1. Require private cars/vehicles to have parking spaces for all vehicles during registration. Validate contracts and pictures by conducting random audits, punish vehicle owners for fake documents/pictures and LTO employees in collusion or not doing their jobs


(Land Transportation Franchising and Regulatory Board (LTFRB)
an inefficient government agency just issuing but not regulating
franchises. They should just rename themselves as LTFB, since they don't do the regulatory function

3. Rationalize all jeepney and bus routes. Grant a route only to a single franchise holder either a private company or transport cooperative. If there's no competition (and wage-based compensation), drivers will obey traffic rules, will not wait too long, save on fuel, load/unload at designated stops, not race/block other drivers and thus move faster

4. Grant only one franchise to cover all of EDSA, say Navotas to SM Mall of Asia or Navotas to Alabang, then separate franchises to service spokes. Drivers will then behave if they have fixed wages. This will make it two/three trips instead of one for some commuters but will be good for the majority. Probably a super franchise for EDSA will do as a start, no other bus companies in competition (some sort of a PPP) and with drivers paid decent wages and benefits

6. Require buses, jeepneys and taxis to install CCTVs/DVRs to deter crimes, hold-ups and snatchers. More advanced blackboxes can also be considered as it records the public utility's location via GPS, and videos of passengers and drivers, similar to how black boxes work in airplanes.


Department of Labor and Employment (DOLE)

1. Phase out the jeepney boundary system and commission-based system for buses. Give wage-based compensation for jeepneys and bus drivers. If this is the case, no more errant drivers in a hurry or hogging lanes/corners, competing for passengers. This can be best implemented if a route is only served by a single company or transport cooperative and not individual operators (most of which do not pay taxes by the way, hello BIR) 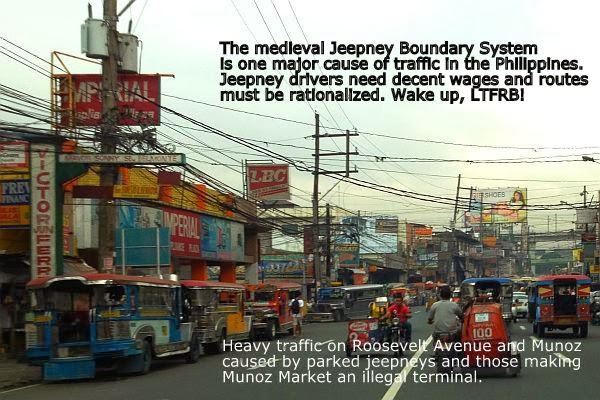 the boundary system is one root of this evil called traffic.

Check if tricycle, jeepney, taxi and bus operators are paying the right taxes. Think most operators don't pay the right taxes. For bus companies with DOLE compliance certificates, check if drivers are really being paid decent wages and not
boundary/commission still

Revise the "stupid" rule which states that the date of reckoning starts on the date an imported second hand bus enters the country, and not the date of its manufacture, unlike locally procured public buses. It's a loophole against the 15 year public buses, already decrepit even if declared new. (The LTRFB knew of this loophole but instead of waiting for BOC to change their rule that may never happen, they can change the LTFRB rule to limit imported second-hand buses to just, say, 10 years instead of 15 years. It's within their power as regulator)

1. Enforce traffic rules
2. Use CCTVs for contact-less traffic violation apprehensions. Manila already is going in this direction
3. Regulate, as in really regulate, tricycle franchises and impound colorum tricycles. Tricycle drivers are too brazen traffic violators. This has become a political tool, why not turn over this to MMDA?
4. Require tricycles, like other vehicles, to have parking spaces prior to registration and enforce the rule.
5. Remove illegal structures and informal settlers blocking roads (East Bank Road in Pasig, Kaliraya in QC)
6. Build more roads/bridges: connect Hemady to Scout Chuatoco (QC), extend Coronado Road up to EDSA (Mandaluyong)

Obey traffic rules, be considerate
Load, unload only at designated stops, not at street corners

Obey the rules
No jaywalking
Ride and drop off at designated stops, do not be lazy and spoiled
Be considerate of other people


You, yes you the reader:

SHARE this post so others will know and probably catch the attention of PNoy and the heads of the various departments and agencies mentioned here.