BGC traffic marshal Mahinay caught Tutubi and his ride with a flat tire. What he did was not any thing expected.

With all the recent bad press the Bonifacio Global City, with traffic marshals/security guards trapping motorists into "illegal parking" traffic violations and towing (wrecker), was traffic marshal Mahinay cast from a different mold?

Tutubi drove from Makati to BGC, specifically at the corner of 4th Avenue and 31st Street, in front of Net One Center (Silk Road Restaurant) and felt the uneven balance of his ride. His guess was confirmed when a bystander pointed to a flat tire

After a few minutes, traffic marshal Mahinay (wearing vest number 73) arrived and started to shoo away other parked/waiting vehicles with blinkers on.

Tutubi drove nearer the traffic marshal and informed him that he has a flat tire to which Mr. Mahinay volunteered to help to change it.

Tutubi went down to get the tools and to bring down the spare tire.

Traffic marshal Mahinay, Tutubi learned, was not knowledgeable in removing the tire (that Tutubi knows he has to kick and use entire body weight just to unbolt the tire. ). Instead of teaching traffic marshal Mahinay, he opted to drive to the nearest gasoline station (Shell on 5th avenue) to ask for assistance and also because it started to rain a bit.

Traffic marshal Mahinay instead of leaving, volunteered to escort Tutubi to the gas station

At the gas station, Tutubi was able to speak to a gasoline boy who knew how to change a Toyota Innova's flat tire, who did it under slight drizzle while Mahinay watches to know how to do it. 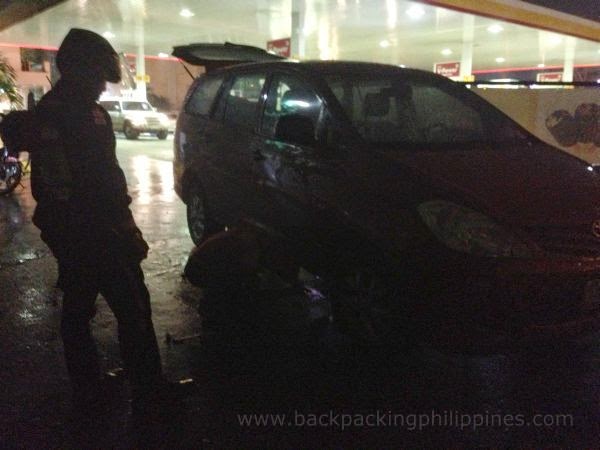 
After just a few minutes it was done, Tutubi gave the unnamed gasoline station attendant a small token for the act. He also offered the same token to traffic marshal Mahinay to which he declined, something not ordinary in this day and age.

to traffic marshal Mahinay, may your tribe increase, and be an example to others!

A very Merry Christmas and a joyful and bountiful 2015.