I've been to Panagbenga Festival thrice already, the first one in 2003 with college friends in an unplanned trip where we literally have no bus tickets and ready accommodations, we just went there; second in 2010 with my office office friends and the third one just recently (Chinese New Year Long Weekend)

Baguio becomes too crowded on the weekend of the Grand Float Parade, here are some tips to survive the Panagbenga crowds (and just about any long weekend in Baguio when people from the lowlands travel up there) 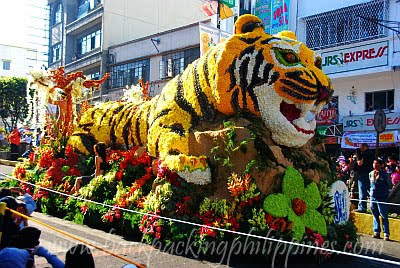 SM's giant tiger float highlighting the year of the Metal Tiger in 2003, Espect a dog this year to signify YEar of the Dog

2. Book room accommodations as early as possible. Choose one on Session Road for the view or within walking distance from Session Road, SM Baguio and Burnham Park for you are never going to be able to park your car, ride a jeepney or take a taxi back as roads are closed, heavy traffic and no taxis in sight

3. Use comfortable shoes as you're gonna do some serious walking

4. On the day of the Grand Float Parade, you can position yourself along Session Road as early as 7am, bring a plastic chair then don't let go of your position. Drink water to the minimum to avoid frequent trips to the toilet. Expect toilets to be crowded and long lines especially for ladies 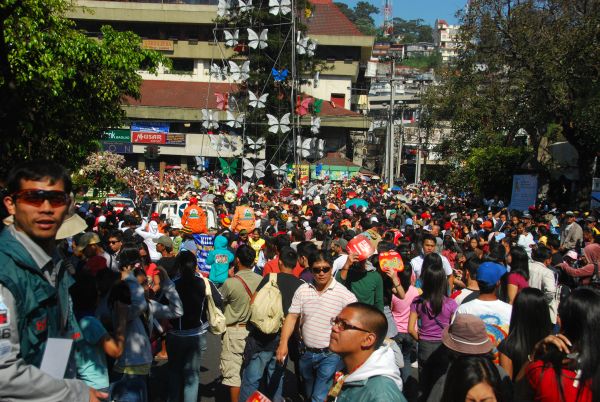 6. Exercise caution at all times. Baguio is relatively safe but there are lots of pickpockets trying to take your hard-earned money. put your bag in front of you, and your wallet and valuables in your front pockets and be on your guard always.

7. To avoid heavy traffic going back to Manila, drive a bit late or better leave the following Monday

For now, enjoy the festival! :)