FACT: You cannot travel, not even get a passport, during Martial Law


Millennials who like to travel and post their life on social media (Facebook, Twitter, Instagram et al) may not be aware of it but if you are one of those who believe stories that Martial Law by Marcos was great, did you know at during Martial Law, you cannot just travel out of the country, moreso get a passport? Thisis beside the well-documented fact that people were arrested, torutured, murdered and disappeared without a trace during this period that Marcos apologists claim is the "golden age" 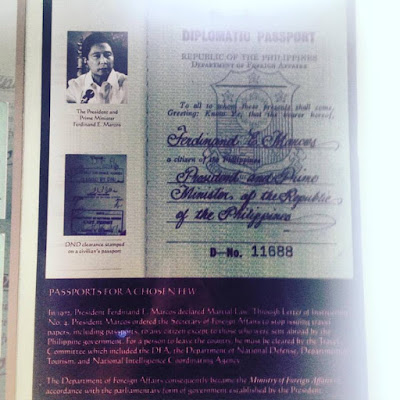 photo of this part of Martial Law history where getting a passport for tourist/leisure is simply not possible (Credit: Ms Summer Parcon). You can see this displayed at the Department of Foreign Affairs on ASEANA

to get a passport then, you need to attend an orientation about the glories of Martial Law but if authorities suspect you are up to something, you will end up in jail

a few years later in 1977, the travel ban was lifted but replaced with travel tax, the presently PhP1920.00 travel tax all outbound passengers pay, but back then, the cost was too high that ordinary citizens cannot afford...


Read: "... President Marcos ordered the Secretary of Foreign Affairs to stop issuing travel papers, including passports, to any citizen, except to those who were sent abroad by the Philippine government. For a person to leave the country, he must be cleared by the Travel committee, which included the DFA, the Department of National Defense, Department of Tourism, and National Intelligence Coordinating Agency."

the letter of instruction, effectively banning travel outside the country in full text:

Letter of Instruction No. 4

This order shall remain effective for the duration of the present national emergency or until otherwise ordered by me or by my duly designated representative.

Done in the City of Manila, this 22nd day of September, in the year of our Lord, nineteen hundred and seventy-two.


People, enjoy your freedom to travel now, glorifying Martial Law and loving travel (and using Facebook) do not go well together.