UST: The Great Raid, Jose Rizal and The Arch of the Centuries

Have you seen the Hollywood movie "The Great Raid" that co-starred Cesar Montano? It brought to life, and out of oblivion, the daring raid of a Japanese concentration camp in Cabanatuan, Nueva Ecija during the last world war.

Seemingly lost to history, the "Great Raid" in Cabanatuan is not the only one in the annals of history. It was followed by daring dawn raids in Old Bilibid Prison in Manila (now Manila City Jail), University of the Philippines Los Banos (UPLB) in Laguna and lastly in UST Compound in Sampaloc, Manila. All four were Japanese concentration camps where American prisoners-of-war (POW) were incarcerated.

This post serves to commemorate a forgotten event in the historic Battle of Manila in 1945 where POWs were successfully rescued from the UST campus.

On February 3, 1945, right after "Ghost Soldiers" successfully rescued prisoners in Cabanatuan, the gates of UST campus were smashed by commando forces led by a Filipino soldier Capt. Manuel Colayco (the lone casualty of the attack) that began the month long, destructive and bloody Liberation of Manila that resulted in the death of an estimated one hundred thousand innocent civilians including women and children due to reckless American bombings and Japanese inhuman acts.

The University of Sto. Tomas, whose complete name is Pontifical and Royal University of Santo Tomas, The Catholic University of the Philippines, occupies an entire city block carved out of the huge Sulucan estate in Sampaloc district of Manila bounded by Espana Boulevard, P. Noval, Lacson (Gov. Forbes) and Dapitan streets. It was founded in 1611 as Colegio de Nuestra Señora del Santísimo Rosario, later renamed Colegio de Santo Tomas, and elevated to university status in 1645. 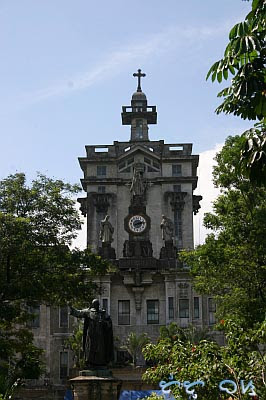 UST Main Building picture with Benavides Monument on the foreground

The University of Santo Tomas’ main building in Sampaloc, Manila, completed in 1927 is earthquake-resistant. Its design enables the building to sway without getting cracked in case of an earthquake. (Pusang Maganda has a nice picture of the magnificent facade of UST Main Building here.)

The three statues symbolizing Faith, Hope and Charity, also known as Tria Haec, (depicted above) on top of the main building were made by Italian Sculptor Francesco Monti, the same man who sculpted the three angels holding sampaguita garlands of Quezon Memorial Shrine in Quezon City.

Arch of the Centuries

Though not as grand as Paris' Arc de Triomphe, the Arch of the Centuries is the only survivor of the original UST campus in Intramuros during WW2, relocated piece by piece to its present location. It sports doric columns and baroque features. The life of Saint Thomas Aquinas is depicted on the sides of the arch while markers of Jose Rizal, Philippine national hero, and Manuel Quezon, former Philippine president, are also present. Both Rizal and Quezon are graduates of UST. 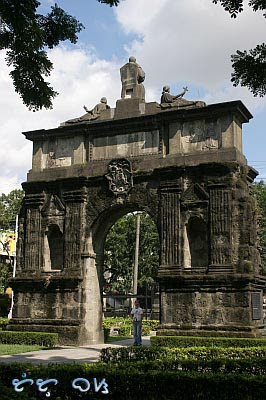 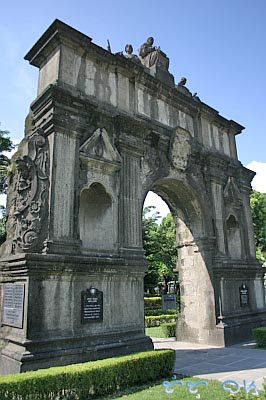 Replica of the Arch-door of the old university building in Intramuros as it appeared in the 17th century (This is the one facing Espana Blvd. picture edited using Photoshop's Shadow/Highlight adjustment to eliminate harsh shadows) 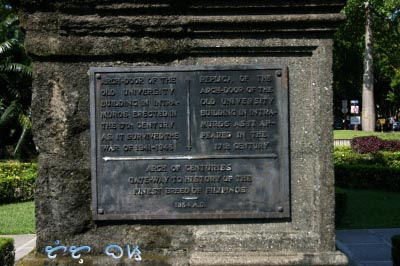 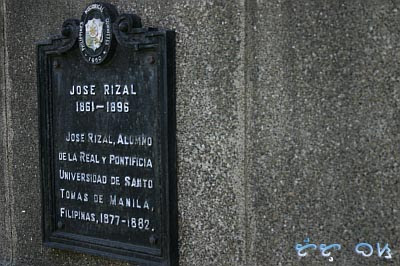 The marker on the Arch of Centuries pertaining to Jose Rizal who enrolled in Medicine in the university from 1877 to 1882. Rizal, however, found the Dominicans (as the Order of Preachers were called) discriminating against Indios (referring to natives by Spanish during that time, Filipinos refer to Spaniards born in the Philippines) and got grades ranging from a mere aprobado (passing), bueno (good), to sobresaliente which were very different from numerous sobresaliente grades at the Ateneo. He did not, however, graduate on top of his class like most people think. (Source: Ambeth Ocampo)

Tutubi was happily taking pictures of the serene and relaxing UST campus when he "flew" too near the security guard at the gate and was asked if he's an alumnus of UST, if not, he needed to secure a permit to take pictures. Tutubi, a graduate of a different university, just stopped taking photos just to avoid an argument yet saved these photos already taken for this post.

Other places of interest in UST:

UST Museum of Arts and Sciences:
Museum entrance Fee: Free for UST students and Alumni, P20 for students, P30 for non-students. Museum open from Tuesday to Friday from http://www.ustmuseum.com/

Near UST, at the end of Espana Blvd is Mabuhay Rotonda (formerly Welcome Rotonda) that marks the boundary between city of Manila and Quezon City. At the opposite end of Espana is the UNESCO-cited art-deco Far Eastern University (FEU) architectural gem of a campus.

Note: España Boulevard was donated to the Philippine government where the deed of donation stipulates that the land cut by this famous avenue will be and remain public provided it is called España, thereby making it immune from stupid politicians of Manila whose accomplishments only range from changing historic street names in "honor" of unknown politicians)

How to get to UST, Manila:

Commute to UST: from Taft Avenue, board a jeep bound for Quezon city with these signboards: Cubao, Project 2&3, Project 4, Project 6, Fairview, Project 8 and you'll pass by Espana Boulevard in front of the school. From MRT Cubao, Quezon Avenue or North Avenue stations, you may board jeeps bound for Quiapo.

Commuting from Marikina, you may take LRT 2 Pureza station then walk towards Lardizabal street where the Tayuman-bound jeeps hold terminal and pass by Gov. Forbes, now Lacson St. Alternately, the Lardizabal-bound jeeps are available at LRT Tayuman station though they will pass M. de la Fuente St. (Trabajo) on their return trip.

Driving Directions to UST by car: gates are on Espana Blvd and Dapitan St. (near UST Hospital) though Dapitan is a one way street, you may take Lacson St then left turn to Dapitan to go there.

Very informative post. I live in Cabanatuan City and we have a shrine to commemorate this event. The Pangatian Shrine and Concentration Camp were prominently featured in the movie. I have posted these places in my blog, so your readers may want to check them out. Have a nice day!!!

Philippine history is truly rich in lore and adventures and amazing incidents. Maybe Hollywood should look farther into it for true-to-life materials.

thanks for the link, i'm just wondering why the guards forbid you to take photos inside, thankfully i didnt encounter problem with them when i visited the place, no i'm not a UST alumni

the atmosphere in UST is very different once i enter. pakiramdam ko parang nasa ww2-spanish era ako lalo na pag gabi. dyou know that the main building is always mistaken for a church? =)

I don't remember going inside of any of UST's building. It must be like the old buildings of Europe.

I love the photos.

thanks for taking me back to UST... great shots. miss ko na dito. been a long while since i visited...

Interesting facts again... I went there long ago for a short visit. I should go back.
Impressive arch.

Wow nice history lesson for all of us! I always pass by UST whenever I go to Quiapo, although I did not realize that there are so many nice places to shoot there. I would do so the next time I drop by!

lawstude, i have i feeling i'm going to visit cabanatuan soon and that campis something i want to visit :P

major tom, the problem with hollywood movies is that the white men are always the heroes and gloss over themore important heroism Filipinos. sort of a white man saved them all kind of stuff

pusa, it has something to do with the guard's notion of DLSR camera are for professional use only

mari, nice architecture hidden by trees of the campus really

sidney, an arch mot people don't know the significance of

nice article about UST :P i never realized how significant that arch was until I read it from here. thanks for sharing!

i've seen the movie. i think that one gave equal treatment to the filipino's role in ww2. i like how the exit of the guerilla leader, played by cesar montano, was portrayed. my only beef was that they didn't film here.

orange, all students of UST pass under the arch as well as graduates sent off.

dave, it was filmed in Australia where the familiar australian outback is highly noticeable against the familiar tropical forests of pinas

I did not encounter that problem we went to UST to take shots of the Arch and Main Building. But I can imagine the feeling of being asked if you are an "alumnus" and to secure a permit if your not(bad trip yon, parang may discrimination).

Oh well, UST has a lot of history. thanks for the lesson.

ah so it was australia. yup we noticed that its not a tropical rainforest they were traversing. what i knew was that they shot in hongkong; thus, the abundance of chinese-looking extras.

traveler on foot,it's frustrating but it's due to the "professional" look pfmy camera even if it's just a basic canon kit lens setup

dave, the scene with Intramuros look-alike was shot in Shanghai even those ones with tranvia. i agree the extras were chinese

twa's a really long time that i was here =) Thanks for sharing!

The guards are actually friendly, at least during my stay hehe. I ask them to pose for me too lol-I was a photographer/writer for the school paper then.

I have been exploring for a little for any high quality articles or blog posts in this sort of house . Exploring in Yahoo I finally stumbled upon this web site. Reading this information So i am happy to show that I’ve an incredibly excellent uncanny feeling I came upon exactly what I needed. I most definitely will make certain to do not put out of your mind this site and provides it a look regularly.