San Pedro de Alcantara Church of Pakil: The Home of Our Lady of Sorrows of Turumba

The old baroque church of Pakil, Laguna is memorable to Tutubi for during his childhood, he helped his mother sell papier mache in front of the church particularly during the Turumba and Lupi when people will flock to the small town next to the towns of Paete and Pangil on a pilgrimage. 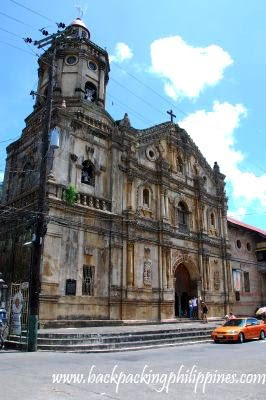 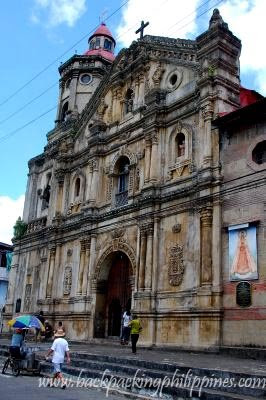 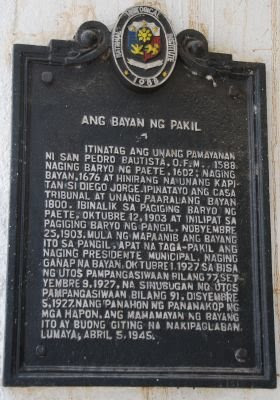 History of Pakil inscribed on the NHI marker

Some of Tutubi's friends prefer to hear mass here either due to more convenient mass schedules or just to meet pretty girls of Liceo de Pakil :P

How to get to Pakil, Laguna:

Commute to Pakil, Laguna: Board a HM Transport bus, with terminal on EDSA, Cubao near Victory Liner, going to Sta. Cruz/Calamba (fare: P130.50) or Green Star Express with terminal on Taft Avenue near corner Gil Puyat (Buendia) and LRT Gil Puyat station (fare: P123.00)then drop off at the terminal in Pagsanjan. Board a jeepney bound for Siniloan then alight in front of the church (note: jeepneys don't pass by the town center during town fiesta and Turumba/Lupi)

From Lucena and Lucban, Quezon: there are jeepneys plying the route Lucena to Sta. Cruz that pass by Pagsanjan, Cavinti and Luisina. Jumbo jeeps that go to Lucban, Quezon terminal at Pagsanjan town plaza where you need to transfer to a Siniloan-bound jeepney.

Commuting from Cavite: board the Pagsanjan or Sta. Cruz vans at Pala-pala terminal in Dasmarinas, Cavite (near Robinsons Dasmarinas and SM) then transfer to a jeep to Siniloan

Driving directions to Pakil via Rizal:

If you have your own car, it's faster to take the Rizal route by going to Marcos Highway, turn right at the junction Masinag Wet and Dry Market, on reaching Antipolo intersection turn left going to Baras (straight ahead leads to Antipolo Church while a right turn leads to Hinulugang Taktak) where you'll pass by Teresa, Morong, Baras, Tanay, and Pililla towns of Rizal province before reaching Laguna towns of Mabitac, Siniloan, Pangil, then Pakil. Follow only the highway in getting there where you'll pass the zigzag road of Manila East Road with great views of the shimmering Laguna de Bay.

this is one place i yet to explore. i have passed this place once to few times but never really got the chance to wander. thanks for sharing.

I love the architecture of old churches. They have intricate designs and are very detailed.

its a shame that im from laguna and havent been there!hehe

I'd been here in 2003. Pakil's history being one of the oldest town is quite interesting.

Off-topic:
As for your question about Sun Broadband USB Dongle, the connection is good but I think the access is limited only to certain points around Metro Manila. If you're into web development, I think this is not for you since you are not given access to FTP. Napster, LimeWire etc. are also blocked. That's their way of implementing fair usage policy. I maintain website but don't do MP3 file sharing (peer-to-peer) so my only abala is doing the FTP. Anyhow, at least I can now surf the web from the comfort of my home...

this is one of the church that i have visited so far in laguna. i've gone here last year for a joyride and i never expected that i will get a chance to explore its interiors. just want to share this blog and photos in multiply. http://jessforget.wordpress.com/2008/08/01/pakil-laguna/

I've never been to Pakil at all. Looks like they really preserved these old churches ver well. Very nice architecture :)

wow, that baroc style is awesome!

Hello! Your page really looks neat and interesting. I hope we can be friends. Would you care for exchange links? Thanks! Hope to see you more often!

tnx 4 posting! its a great help on what to expect going to pakil, laguna on my visita iglesia last march 31,2010. its holy wednesday & also my bday when we visited the church of pakil 4 d very 1st time.we enjoy a lot while cruising rizal & laguna, all d way 2 lucban,quezon on motorbike.with my wife, as backrider.more power 2 u!