Built in 1978 by the government of Japan and frequented by little Tutubi of the 80s when his father was working at the National Power Corporation's hydro power plant project, the Japanese Garden, located near the shores of Caliraya Lake is a popular picnic place and photography location shoots (e.g. prenups and probably a garden wedding venue).

On entering the place, you'll notice towering trees (a delightful treat to biologists and nature lovers alike) and wide spaces of green grass ideal as picnic areas. There are also cottages (no rental fees), restrooms and a snack counter, a man-made lagoon (that used to have kois and goldfish years ago). For those going on a picnic, food is allowed to be taken in but be sure to not leave your trash behind (as it should always be). 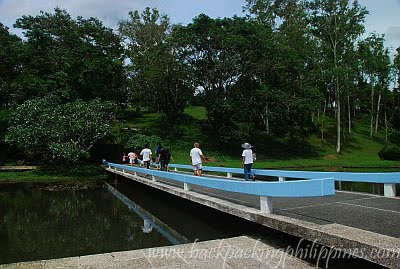 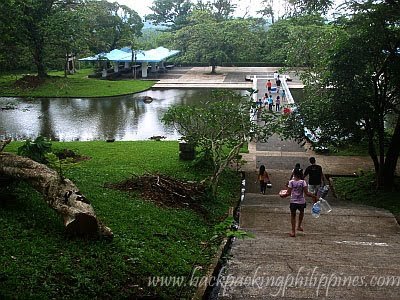 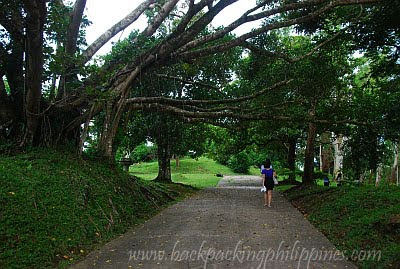 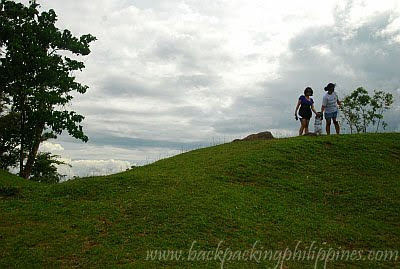 the hilltop provides a good photo opportunity much better if there's a blue sky. the top of the hill offers a great vantage point for viewing the twin lakes of Caliraya and Lake Lumot while savoring country fresh air 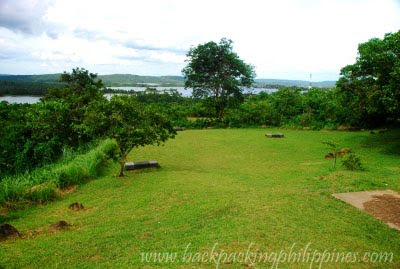 the view of Lake Caliraya on the hilltop

Inside the Japanese Garden is a shrine constructed by Philippine-Japan Friendship Society in memory of the Japanese soldiers who perished in the battle during World War II between the Japanese and Filipino-American troops. (Tutubi overheard a local mentioning Gen. Tomoyuki Yamashita held camp at the garden wile on another occasion also heard Yamashita and the fabled Yamashita Treasures were buried there. Such rumors still persists! 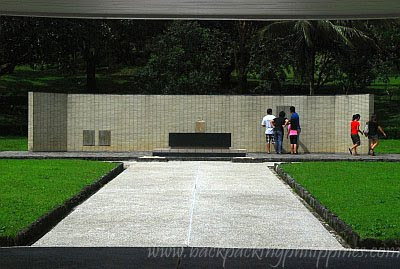 the Japanese memorial to fallen soldiers of World War II...no mention of Gen. Yamashita (as Tutubi can recognize Yamashita in Nihongo/Kanji if it's written on the historical markers)

In truth, Gen. Yamashita used the mountains of the Cordilleras to defend against the combined forces of the Americans and Filipinos (and some Australians though largely ignored by history); surrendered in the town of Kiangan, Ifugao; tried by a kangaroo court of Gen. MacArthur, convicted for war crimes he didn't commit, hanged and buried somewhere in Los Banos, Laguna near UPLB and Bureau of Plant Industry. The site is now called Homma-Yamashita Shrine and is the subject of a future Tutubi exploration. The "Tiger of Malaya" is now enshrined at the infamous Yasukuni Shrine in Tokyo. 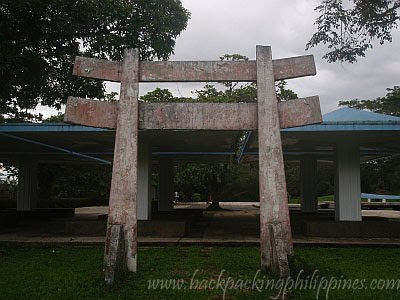 one of two torii inside the Japanese Garden

For those wishing to visit the Japanese Garden

P10.00 for adults (including employees of NAPOCOR)
P5.00 for children

How to get to Japanese Garden, Cavinti, Laguna:

From Quezon City, the fastest route to Japanese Garden is via Rizal province and Manila East Road that'll take you to breathtaking views of Rizal province's "bitukang manok,"the city of Antipolo (via Sumulong Highway) and towns of Teresa, Morong, Baras, Tanay, Pililla, and the Laguna towns of Mabitac, Famy, Siniloan, Pangil, Pakil, Paete, Kalayaan and Lumban. In Lumban, you need to turn left when you see the kilometer 95 marker then go up Caliraya-Cavinti Road where Japanese Garden is located. Travel time via this route is around 3 hours from Trinoma/SM City North EDSA.

From Makati, you can take SLEX Calamba exit then turn right at Calamba Crossing (unless you know the bypass road in Real up to Halang to avoid traffic) then drive all the way to Lumban to kilometer 95 marker. Follow the upward road til you see the Japanese Garden sign to your right.

Commute to Japanese Garden? It's not really easy and reliable but possible to get there via Sta. Cruz, Laguna where you can ride jeepneys plying the Sta. Cruz - Lumot route (look for the signboard Lumot, refers to Lake Lumot and Lumot, Cavinti)

Other attraction: Lake Caliraya, Lumot Lake and the so called Magnetic Hill near the kilometer 98 marker. The Japanese Garden is said to be the drop off point for the one hour trek to the secluded Twin Falls of Cavinti but the waterfalls but is located in a private property so no effort is made to verify the claims of locals.

yay, this place will be on my next post. i went there with dom, erick and lantaw. cool place, sarap matulog don.

the janpanes garden was beautiful! so relaxing! I love love laguna! so green and so full of historic relevance!

i studied in UPLB, so i must have some bias! he he!

Hi, im planning my prenuptial there, just want to know if may pwede bang saksakan ng electric airbrush for my make up sana... and I will bring my 2 dogs. May idea po ba kayo? Thanks!

anonymous, there's a cafeteria/small store there near the washroom, don't know if you can plug but you can ask. not sure about the dogs though if they'll let you enter with them unless they're of the small, cuddly breed that you can smuggle inside

bb.bernal, i don't think there's a prenup fee. you're free to shoot as you won't be bothered by the guards. you don't have access to electricity so your shoot is limited to early morning to dusk. entrance fee is still the same, was there again just last december 2012

anonymous, yes, you can bring food and drinks there. we celebrate simple birthdays there through family picnics