Longos is a barrio of the town of Kalayaan, the municipality in between Paete (Tutubi's hometown) and the barong weavers' town of Lumban. Tucked away on Real St and walking distance from the Exotikk Restaurant and RS Resort near kilometer marker 100 of Manila East Road (national highway) is the old stone church of Longos dedicated to San Juan Bautista (St. John The Baptist) whose feast day falls on December 27 (the town fiesta of Kalayaan that Tutubi used visit in his childhood). 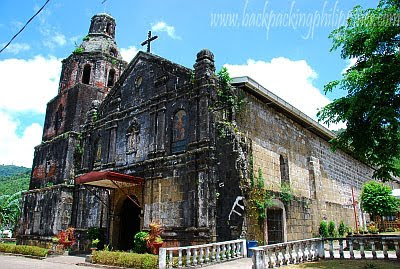 Built circa 1669 and like most churches in Laguna, it's also founded by the Franciscans. 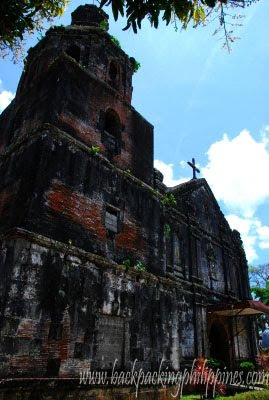 There's another two other Catholic churches in Kalayaan town, the other first, a new one, in barangay San Juan (Kalayaan's "capital") and another in San Antonio up in the mountains of the Sierra Madre (that's never visited by Tutubi and always teased by his father about it as one of the few places he reached that Tutubi wasn't able to so far, besides Tiwi, Albay) 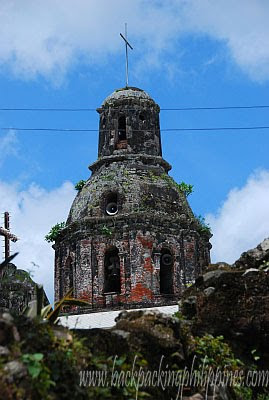 the belfry of the old stone church

What's sad about this church though is that only the stone facade is quite preserved (quite, because of that eyesore on the church door above the arch) with the very visible use of galvanized iron for it's roof and steel trusses. 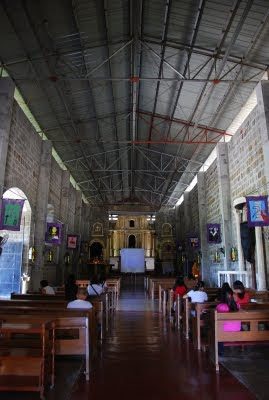 the church interiors with steel trusses and GI roof.

How to get to Longos, Kalayaan, Laguna?

It's a jeepney ride away from Laguna's capital town of Sta. Cruz. You need to ride an HM Transport bus (fare: P148.50)on EDSA, Cubao or Green Star Express bus (fare: P140.20) on Taft Avenue, Pasay City near LRT Buendia, alight in Sta. Cruz then ride a Siniloan-bound jeepney. Request the driver to drop you off in Longos "Loob" else you walk from Exotik restaurant to the church.

a beautiful old church. the belfry is stunning. i hope some rich parishioners would donate money for the ceiling.

luna, not too many people in that part of the world, much more rich people but they can try to do a fund raising for the project

we lived in longos for about nine years and heard masses in this church. before typhoon "milenio" came, there used to be a nice ceiling on this church. nice to look at but not that strong type of material (i don't know what it's called, plastic or vinyl or whatever, but it's a prefabricated material which was "assembled" as ceiling). after milenio, all the ceiling and almost half of the roof was gone. what we see now is the result of the effort of the parish council. it's a work in progress.

correction Saint John the Baptist day is June 24, December 27 that is Saint John the Evangelist of San Juan, their is no town fiesta at all. The town of Kalayaan is divided in 3 barrios, namely Longos,San Juan and San Antonio. Originally the Longos is the capital town but it was moved to San Juan by Sen.Lagumbay.