A favorite of Tutubi's younger brother now living in Malabon, kinulob na itik is a deep-fried duck recipe in Victoria, Laguna, a town with duck raising as main industry that was visited by the contestants of Amazing Race 5 where they chased ducks in their muddy shelters to get the next clues of the popular reality show.

Tutubi eats kinulob na itik not on his own initiative but mostly due to his brother's "addiction" to the Laguna delicacy. While in Victoria, he asked some locals around that led him to some sort of "victoria's secret" on the best kinulob na itik in town: Rollyesmer's Kinulob na Itik, deep inside the town center of Victoria, kilometers away from the main highway, in a hidden location yet sought after by locals and people in the know, bypassing the numerous stalls on the highway, including one that boldly proclaims itself as the "original" kinulob na itik, mimicking the highly successful original buko pie of Los Banos marketing ploy.

The owners of Rollyesmer's Fried Duck, Rogelio Ramirez and Esmeralda, both in their 60's, developed their own kinulob na itik recipe that still lures customers to their humble home, lighted only by a simple, slightly damaged sign outside their home. On talking with Mang Rolly about his secret fried duck recipe, he also narrated that he has relatives in Paete, Laguna that Tutubi's father also knew, unlike Tutubi who's now virtually unknown and knows less people in his hometown. Tutubi also asked around for bibingkang itlog (puro), related to the stinking bibingkang abnoy of Pateros.

The secret of the fried duck recipe? Mang Rolly first removes the duck feathers and internal organs before boiling the duck in water for about three to five hours. Garlic, onions and secret ingredients are then added, until the duck’s own oil starts to appear. Then the duck must be deep fried until it becomes crisp. The secret ingredients, in right amounts during the boiling process, removes the smell and pungent taste that turns off most people to ducks. 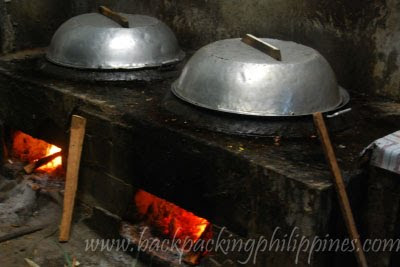 the wood-fired stove where the ducks are boiled for hours 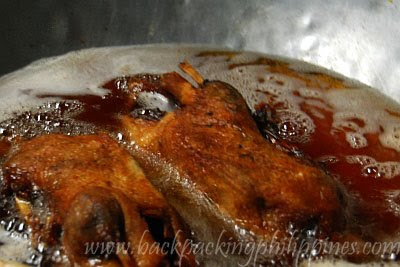 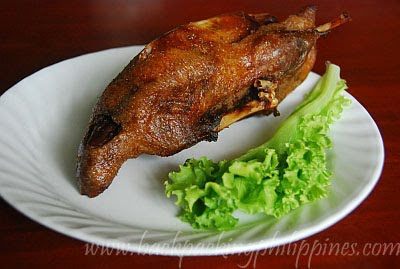 Victoria's Secret kinulob na itik, served without the usual sauce. Price is P140 each. Note the lettuce only added by Tutubi to add color.

It's by their special fried duck recipe that keeps them in business, selling about 30 fried ducks a day, in a hidden location somehwere that's called Victoria's secret...now in the open!

Commuting to Victoria, Laguna is easy. Take a bus to Sta. Cruz (either
HM Transport on EDSA, Cubao, Quezon City or a Green Star bus on Taft Avenue near corner Sen. Gil Puyat Avenue (Buendia, near LRT and JAM bus terminals) and request the driver to drop you off in Victoria's Poblacion (Landmark: Petron gas station and a Victoria poblacion arch, the bus conductors call Balite (probably a balete tree used to be there) a few kilometers from the giant ducks statues in Masapang. Transfer to a
tricycle and ask to be taken to San Roque specifically at Rolly's Kinulob, locals know the place.

If you have a Garmin GPS navigator, the easiest way to get there is to use Open Street Map with the map of Victoria, Laguna updated by Tutubi that shows the actual location of Rollyesmer's Kinulob na Itik deep inside the town :P If you don't have one, just drive down to the town of "Mighty Ducks," enter the main road to the poblacion, a right turn followed by a left turn going to San Roque (a basketball court at the end) then left when you the San Roque arch then a right to an unknown road. Ask for Rolly's kinulob there and you won't get lost.

what is an abnoy? parang penoy din ba?

photo cache, abnoy is stinking bugok na itlog they sell boiled (like penoy and balut) or made into bibingkang abnoy in Pateros. One of my upcoming posts is about bibingkang itlog that's sometimes laden with abnoy-- stinking yet delicious! :P

I've tried this when one of my aunts brought a couple of pieces as pasalubong when she passed by Victoria. Masarap. :) I'm looking forward to your abnoy post.

i prefer birdwatching to bird eating

but lemme try this first

the presentation looks so simple but it does look tasty :) I'd love to try this.