For people looking for information on how to get to Puerto Princesa Underground River in Palawan, curious after it won as one of the New Seven Wonders of Nature.

how to get to Puerto Princesa Underground River in Palawan:

Getting there is really not easy the backpacking way, as there's still unreliable public transportation to get there but there were and are many foreigners who tried.


or visit the booking office:

5. In Sabang, proceed to the Tourism office to book your boat to Puerto Princesa Underground River cave entrance

6. Near the cave entrance, enlist for another boat, good for 6 people, to ferry you inside and out of the longest navigable underwater river in the world. 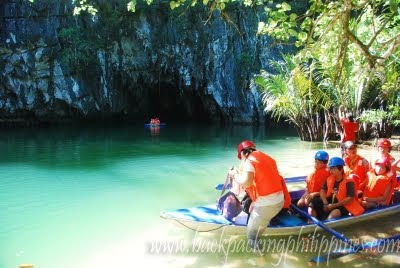 How to Get to Sabang from El Nido:

Follow this post on How to get to El Nido from Sabang to get an idea as it's just the reverse.

Note: Prices, costs, rates and fares may change without prior notice, mainly due to skyrocketing gasoline prices. Expect fare hikes anytime soon. Tutubi will update this from time to time by calling his friend in Palawan (sorry, can't post his contact number here for privacy)

It's more fun in the philippines !

This is quite easy to follow. Thank you for posting this information on how to get to Palawan. One of best Island that you can visit in the Philippines.

The information you shared will help me a lot in my Palawan trip this coming August. Thanks! Am excited hehe!

hi, is there any van for hire going to sabang, we're a big group and we will arrive at the airport at around 4-5pm so we will not be able to catch the last trip of the jeepney ride :( any idea on how much the van would cost? thank u!:)

angel, yes. vans for hire to sabang at new san jose new market. van rental rates no idea but perhaps in the P3k up prices

Hi, aren't there any fees for boat rides? I'm totalling the entire fees and they just amount to almost P200. Very far from the P1,500 tour package that I see from the net.

Krissy, the fees for the reservation and the actual boat ride not posted. will update this soon

larissa, i updated the information above to differentiate. the entrance fee is more like environmental fee to the underground river, the other fee is for the price of the banca ride to tour you inside the underground river and caves (there are six persons per boat plus the boatman/guide)

How to get there

Hi! You can conveniently book the Underground River online under ppur.com.ph