A childhood favorite street food of Tutubi, long planned to be blogged but not quite til now, is this obnoxious smelling yet delightfully satisfying bibingka recipe variant of Laguna where duck eggs are mixed with abnoy (spoiled eggs) and cooked in clay pots lined with banana leaves where it emits an obnoxious aroma.

One memorable event Tutubi regarding this Laguna delicacy is in Lingga, Pila where his friends cooked them for their group who found the smell too much to endure yet devoured the bibingka itlog in seconds right after they were served. 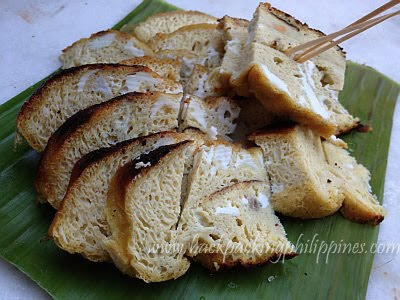 the bibingkang itlog is usually sold on the streets of Paete and neighboring towns but probably made in Sta. Cruz and Victoria (where the duck industry flourishes). This version is not the best though as you can see holes in them due to added flour or other extenders The bibingkang itlog vendor at Sta. Cruz Public Market, Tutubi's suki where you can sample difference levels of obnoxiousness before you buy, you can even buy those without the rotten smell/taste but it's not the exotic type Tutubi longs for 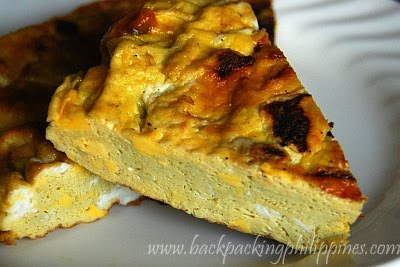 The Bibingkang itlog (puro) has slightly yellowish color and not much holes. Costs around PhP100 per pie. You can buy them at the public markets of Lumban, Sta. Cruz, Pila and other towns

Bibingkang Itlog is best served with spicy vinegar and to make it authentic street food, sold on banana leaves, and eaten with toothpicks (as shown on the top picture). Bibingkang itlog though, like other exotic food, requires an acquired taste to enjoy it otherwise it's like a Fear Factor challenge. This is easier to ingest though than the more exotic and challenging bibingkang abnoy of Pateros, made wholly from abnoy (bugok na itlog ng itik) but fried (like torta) then dipped in spicy vinegar.

Other future posts of Tutubi just on his drafts folders for ages now :)

It is not unhealthy to consume rotten eggs?

bertN, not that i know of. no problems with it. it's just like ordinary eggs without the rotten smell :)

I miss this!! Im craving for this right now! If anyone knows where I can buy it here in SoCal.. please let me know.

Where in sta cruz public market can i get a less smelly one?:)