Laguna: How to Get to Paete (Commute, Directions, Route))

As asked countless of times on this blog on how to get to Paete (Tutubi's hometown) either to buy wood carvings, get in touch with artists (painters, ice carvers, chefs), climb Tatlong Krus and waterfalls, spend Holy Week or for other reasons.

How to get to Paete, Laguna:

View this Map of Paete, Laguna for a visual presentation of directions when you zoom in. 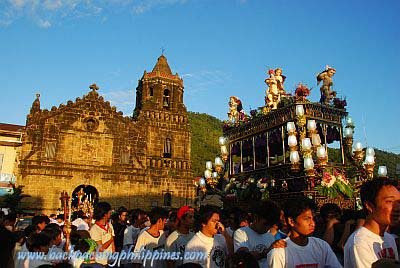 a view of Paete Church's intricate facade and baroque features

How to Commute to Paete, Laguna:

either of these buses will take you to Sta. Cruz, Laguna where you can ride a jeepney with signboards either Paete or Siniloan to take you to Paete.

From Lucena and Lucban, Quezon: there are jeepneys plying the route Lucena to Sta. Cruz that pass by Pagsanjan, Cavinti and Luisina. Jumbo jeeps that go to Lucban, Quezon terminal at Pagsanjan town plaza. In Pagsanjan, transfer to a jeep with Paete or Siniloan signboards

Commuting from Cavite: board the Pagsanjan or Sta. Cruz vans at Pala-pala terminal in Dasmarinas, Cavite (near Robinsons Dasmarinas and SM). Board a jeep to Paete or Siniloan

Follow this route to Paete: from SLEX take Calamba exit then head straight to Calamba. turn right at Calamba junction and follow this road and highway until you reach Pagsanjan (after Los Banos, Bay, Victoria, Pila, Sta Cruz towns) where you turn left then pass by towns of Lumban, Kalayaan then finally Paete

Directions by car from Quezon City, it's faster to take the Rizal route by going to Marcos Highway, turn right at the junction Masinag Wet and Dry Market, on reaching Antipolo intersection turn left going to Baras (straight ahead leads to Antipolo Church while a right turn leads to Hinulugang Taktak) where you'll pass by Teresa, Morong, Baras, Tanay, and Pililla towns of Rizal province before reaching Laguna towns of Mabitac, Siniloan, Pangil, Pakil, then Paete. Follow only the highway in getting there where you'll pass the zigzag road of Manila East Road with great views of the shimmering Laguna de Bay.