In the never ending fight to solve Metro Manila traffic problem, MMDA Chairman Francis Tolentino proposes a new MMDA Number Coding system to include four numbers instead of the current two numbers of car plate last digits where all vehicles will be banned from the street two times a week. 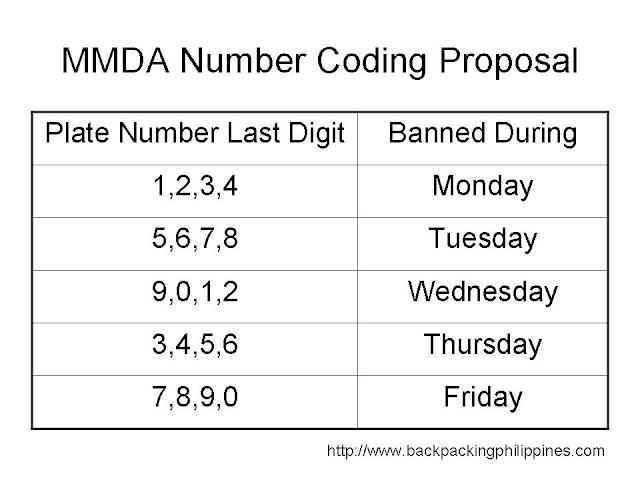 The new MMDA number coding system simply means an estimated reduction of 40% vehicles during the number coding time of 7am to 10am and 3pm to 7pm from the present 20% in the current system using two numbers.

Cars will then be banned from the roads two days in a week. (Disclosure: Tutubi has two cars: Scarlett's plate number ends in 3 while Juno's ends in 0, if this will be implemented, won't be affected much as his two cars are not banned on the same day. But if public transportation will be improved, he can just commute to lessen his carbon footprint :)

Question: will this apply to public utility buses and jeepneys? Tutubi thinks it should as they're really too many, blame the LTFRB for not doing their jobs. They just issue/renew franchises even if they're not really needed. They can't even enforce the phasing out of old, dilapidated buses.

MMDA chairman is laudable for really thinking and trying hard to solve the traffic problem but it's only a band-aid solution. There are many other ways to solve this. How about other government agencies?


If only Tutubi can be president, he knows how to solve the traffic problem without investing something, just use political will. To solve traffic in Metro Manila, the MMDA cannot do it alone, they need the help of the following government agencies. Herewith are Tutubi's suggestions:


MMDA: ENFORCE TRAFFIC RULES, lobby to pass an enabling law on contact-less traffic violation tickets using CCTVs so as to penalize even government vehicles and protocol plates, e.g. the notorious number 8 of congressmen, (Drivers will behave if they know they will be caught) ban provincial buses on EDSA by constructing integrated bus terminals near SLEx and NLEx. Construct better waiting sheds for commuters to protect them from rain (one of the reasons why heavy traffic on EDSA when it rains is that buses compete for passengers waiting under MRT stations as they're safe from the rain there)

LTO/LTFRB: remove all colorum vehicles, implement RFID, other electronic tagging or even automatic plate number recognition of all public utility vehicles to easily identify colorum buses and jeepneys, remove redundant jeepney routes (like the Munoz-Pantranco route in Quezon City), allow car registration only upon proof of garage/parking area, rationalize the EDSA Bus routes (note: all those buses pass by the segment of East Avenue to Ayala Avenue) and jeepney routes (e.g. Espana in Manila receives all jeepneys from Quezon City, Ortigas Avenue all jeepneys to EDSA Central from Rizal) and lastly, the SINGLE MOST EFFECTIVE WAY TO MINIMIZE TRAFFIC IN THE WHOLE COUNTRY is to force all routes to form a single company or transport cooperative and eliminate those jeepneys and buses jostling for position, too much waiting at every street corner. Drivers will behave once they don't have to hurry to catch their boundary and transport companies will not let loose all buses even if they're not even half-full during rush hours.

DOLE: remove the boundary system of jeepneys and taxis, and the commission system of buses. Give drivers and conductors fixed wages and benefits. (this is the single most effective way to solve the traffic problem that can be implemented by forcing all jeepney routes to form companies or transport cooperatives. This way, only the right number of buses or jeepneys will ply the route instead of all of them competing for few passengers, like most business do to reduce unnecessary trips (and reduce emissions and fuel imports, improve air quality)

BIR: tax all jeepney operators, get the data from LTFRB. How many of them pay taxes?

Local Governments: do not allow street parking, tow them. Do not allow people (especially informal settlers to close roads). Clear roads of sidewalk vendors (Balintawak in QC, Divisoria in Manila and Baclaran in Paranaque are three prime examples)

DRIVERS: follow traffic rules. Be considerate to other drivers and pedestrians

You have posted a highly informative writing. I have learnt a lot from here. Can you post another one like this?