Tutubi's not rich nor is he poor. Just a simple man who loves to explore and share his travel experiences and information online.

Los Angeles Lakers power forward/center donated $1000 for every point he scores in the Lakers - Warriors game (he scored 24 points in that game, so that makes it $24,000.00)

Meralco Bolts guard Mike Cortez will donate P500 for every point that he would score in the ongoing PLDT myDSL-PBA Philippine Cup.

Tutubi's not a star, doesn't make loads of money. In fact he's not afraid of the end of the world but he dreads the end of the month when it's time to pay bills. He already set aside 20% of his banner ad earnings for December 2013 for the typhoon victims and willing to give everything if people will like and share his travel blog. He's doing this to promote the blog Facebook Page, instead of paying Facebook to promote it. 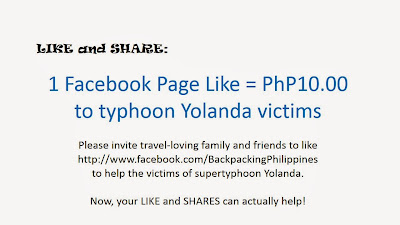 It's simply his own way of helping, to give until it hurts. He's only made quite a donation, dropped off donations of his officemates to a relief group in Quezon and intending to volunteer as a driver for Oplan Hatid but his lack of time simply did not permit it.

You can't help typhoon victims simply by ranting on social media nor the mere act of Liking or Sharing, you can only doing it by donating cash or kind to relief efforts or as a volunteer warm body at relief centers.

Tutubi's actually targeting NGOs or foundations who will help Yolanda victims rebuild their lives, either by building boats and buying nets for fishermen, seeds and farming tools for farmers and other industries. These will make them less dependent on food relief.

Note: Travel bloggers make money from blogging but if you want to know how an income statement of Travel Blogging as a Business, you may click this link

Disclaimer: This proposition refers to the actual number of new Likes on Backpacking Philippines Facebook Page starting December 1, 2013 and ends on December 31, 2013. There is a number of Likes daily, from organic traffic referred by the blog.

Instead of paying Facebook to promote the page, Tutubi will help typhoon Yolanda/Haiyan victims rebuild their lives and become self-sufficient again.

UPDATE:
January 2, 2014 This "promotion" got a total of 123 likes as Tutubi did not promote it (some people may not like the idea) but Tutubi's actual donation, excluding his time and effort ferrying donations of friends and offficemates, to his chosen NGO in Quezon City far exceeded the amount required. Modesty and his not being a politician told him not divulge the actual amount, his works will be judged not by men.