Here's good news for travellers from the north going to NAIA for their flights out, you can just proceed to Victory Liner bus station on EDSA Malibay in Pasay City then board na HM Transport bus to your airport terminal destination
herewith are the details: 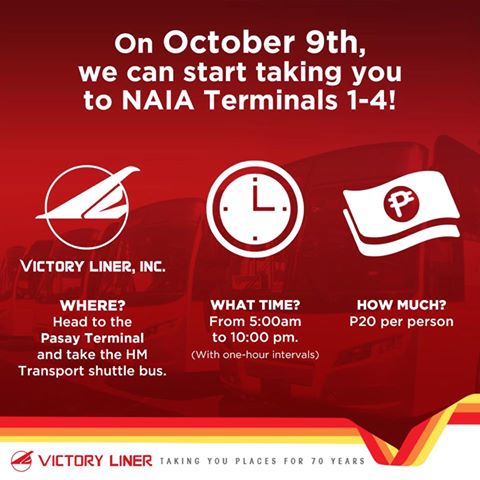 Bus schedules: From 5am to 10pm, with one hour interval between trips
Bus Fare: PhP20.00

there's news though that the LTFRB has approved franchise route extension of several city buses to proceed to NAIA Terminal 3 to take NAIA Road from Roxas Boulevard, Domestic Road, then Andrews Avenue to load/unload only at Circulo del Mundo near NAIA Terminal 3. Other buses with signboards MIA already pass by NAIA Terminal 1 and 2

I would be cheaper than taking a taxi from the victory liner terminal to the airport. This is a good news for a lot of Philippine OFW's.