Just what makes planned trips frustrating is that most of the time, they don't materialize mostly due to dependencies involving other people. Tutubi has a high "completion rate" for trips he took on his own, not so when other people are in it.

The recent planned trip to Piit Resort in Pangil town (now renamed http://www.backpackingphilippines.com/2011/08/panguil-river-eco-park-piit-resort.html) and/or Turumba Swimming Pool (now Turumba Springs Resort or the Panghulo (formerly known as Nuestra Señora delos Dolores de Turumba Swimming Pool), both visited by the child Tutubi, did not push through due to rains and some commitments in Tutubi's "entourage" but he opted to push through with another place he wanted to re-visit: The Twin Falls of Kalayaan, Laguna.

The town of Kalayaan, Laguna, Paete's next-door neighbor has not just one, but two, waterfalls (e.g. Paete has it's own waterfall, Pakil has one, Pangil at least two, Siniloan has 6, Sta. Maria has about 3 waterfalls, Pagsanjan/Cavinti have the world-famous Pagsanjan Falls (magdapio falls), Los banos Baños has Dampalit Falls et al) that Tutubi visited when he was still a child together with his brothers.

A last minute decision to visit any of the three mentioned resorts near Paete was reached when Tutubi's father confirmed the presence of parking area near the twin waterfalls, and so the 10 minute drive from Paete to Kalayan pushed through.

On arrival at the resort around 4:30pm, Tutubi was informed that the resort will close at 5pm and that cleaning of the pool was taking place, but the gatekeeper let them enter the resort premises for free, something that is really good for Tutubi for he didn't intend to swim due to the already cold weather (the water there is already cold even during summer). Tutubi only wanted to check out the place to take pictures for additional "bloggable" place, he took a few pictures, again showing his lazy way not to bring a tripod (and an ND filter), and went to chat with his first cousin hanging out at the resort, someone he hasn't seen for quite a while. 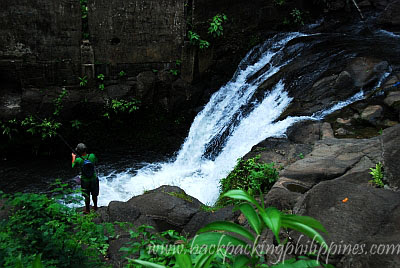 the first cascade of several waterfalls, this is not one of the twin falls but the first waterfall you can see. The man is catching fish or probably mountain shrimps/prawns besides adding scale to the picture 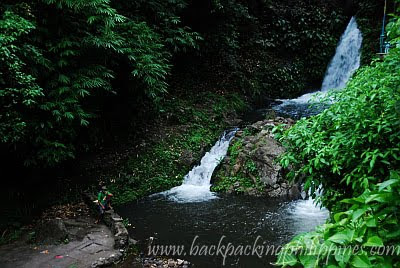 another cascade, still not the twin falls of Kalayaan, but children falls :P 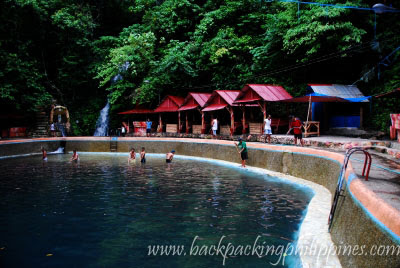 the lower waterfall of Kalayaan Twin Falls (partly hidden by lush vegetation) whose basin/lagoon now developed into a swimming pool. The other twin falls can be reached through concrete steps/stairs on the mountain sides (the Sierra Madre mountain range). Tutubi didn't bother trekking up due to limited time as rains may spoil the hike.

Kalayaan Twin falls, to Tutubi's expectation, is now a barangay operated resort with the huge basin now turned into a swimming pool with marble bottom. He remembers the lagoon before surrounded with huge rocks where you can hop on top but quite slippery.

After a few pictures and chit-chat with resort gatekeeper and his cousin, Tutubi left off without a visit the real twin of the waterfalls that can be reached via concrete steps.

Two memorable waterfalls for Tutubi, a re-visit in the future not far off :P

How to get to Kalayaan Twin Falls:

Commute to Kalayaan involves a bus ride to Sta. Cruz, Laguna (HM Transport from EDSA, Cubao, or either Green Star Express, or DLTB in Pasay Taft/LRT/Buendia) followed by a jeepney ride (with signboard: Siniloan or Paete). Request jeepney driver to pass by Kalayaan Highway (not loob or town proper), alight in front of St. John Evangelist Parish (San Juan Evangelista) on Manila East Road (national highway) then walk about 400 meters upwards to the waterfalls (you pass by Villa Monte Gracia Resort on the way)

Coordinates: 14°19'16"N 121°28'54"E
Map of Kalayaan twin Falls on OpenStreetMap, updated by Tutubi (you can update the map yourself like Wikimapia or Google Maps with the added benefit of loading it to a GPS Navigator e.g. Garmin)

Having so many travel posts with dates not far from the last one, I wonder what you actually do for a living.

I envy you my friend.

andolini, i'm a full time traveler part-time office worker in makati. nope, I don't work for the department of tourism...i go on trips but i blog each leg/segment and spread out posts at least once a week :P

thepinaysolobackpacker, found this falls when i was about 6years old? hehe never been to abra...just one of those provinces i've yet to explore. i remember i still have the unfinished Ilocos Sur series plus some posts on La Union :P

lyrahc, from manila fare's about PhP150.00 HM Transport or Green Star then a jeepney ride about PhP20.00 sta cruz to kalayaan. the 20 persons? probably due to the cost that's why you might get charged P2k for two persons. i didn't see overnight accommodations, just cottages

I didn't know na meron pala nito sa LAGUNA , thanks to google and to your blog

Jonathan, Laguna has numerous waterfalls for you to enjoy :)